An Open Letter To the Sci Fi Channel and Mr. Tim Brooks

For those of you who don't know, the SciFi channel is changing its name to SyFy (pronounced SiFee and an accepted short name for syphilis). Stupid, yes but nothing worth getting worked up about. After all, we've known for some time now that the SciFi channel executives weren't the sharpest knives in the drawer. Spoons, some would say. What upsets me is the opinion that the SciFi channel has of its own viewership. Says Mr. Tim Brooks one of the "founders" of the network -

"The name Sci Fi has been associated with geeks and dysfunctional, antisocial boys in their basements with video games and stuff like that, as opposed to the general public and the female audience in particular..."

For those who wish to express a dissenting opinion, Mr. Brook's email can be found here. I sent him my thoughts. You may read them below, if you wish...

With all due respect, your expertise on television, the recording industry and copyright issues clearly has a hole in it where SciFi fandom is concerned. The impression that SciFi fans are dysfunctional only pervades those professions which require little if any creative work. I imagine that many investment brokers, accountants and bureaucrats would agree with you. But if you polled surgeons, pilots, editors and physicists, you would find many who not only vehemently disagree with your generalization but count themselves among those ranks.

In short, you are wrong.

So to say that the SciFi channel is stigmatizing itself by remaining with the ScFi moniker, is to ignore the fact that anyone who might watch the SciFi channel wouldn't be aware what a minority of the public feels about its name.

In short, your assessment skews well outside the SciFi channel's demographic.

I guess the reason that your assessment angers me so is not that I fear that it is right. Not that I fear others might agree. But that others, being uninformed might trust you because you should be. And sadly, you are not.

I could point out that there is (and verifiable so) a general belief that people who love books, write or pontificate on the value of literacy are antisocial, reclusive and add little of value to society. In short, they are 'bookish'. While both you and I know this to be false, it does little to dissuade the general public of this notion. Is Book TV doing itself a disservice by tying its programming to such an image? Should Book TV become BTV to avoid appearing 'bookish'?

All this is to say that only those who wish a stigma upon fans of science fiction see a stigma there at all. Science fiction is mainstream today and only those who are themselves reclusive and uninformed see a disconnect between SciFi and pop culture. I do not wish this letter to be a direct attack on you, Mr. Brooks because I truly wish no malice upon you. But I do honestly, keenly longingly hope that you take an opportunity to see where science fiction is today. Where its fans are. And generally notice how much science fiction shapes the way average people everywhere view their own lives, their jobs and their futures. You should take time to ask them but when you do, don't look in basements, libraries or comic book stores. Look in cockpits, barracks, hospitals, universities and the halls of government. Because that is where fans of SciFi hang out today.

Mr. Brooks won't listen. Neither will SciFi. But we owe it to ourselves to be heard and not herded. I find it ironic that the group of Americans most unequivocally sheltered, secluded and uninformed - specifically network executives - believes that their own audience is more reclusive than themselves. Some support a wall along our southern border. I'm thinking that one around Rockefeller Plaza would do more to serve the interests and security of the United States.

I mean network execs - they are fine folks and all - but would you want your daughter to marry one?
Posted by Hunter at 1:29 PM

That's right, an asteroid discovered only this Monday will whiz past only 85,000 km away or so this morning.

We didn't see it coming.

It didn't hit - this time. But had it been slightly closer and slightly larger, we would have had sufficient time only to rethink our transgressions. Nothing more.

I reiterate and I can not say this in a more serious or forthright manner: If you do not support the space program and Near Earth Asteroid intervention, please select another phylum to inhabit. Mine does not need you.
Posted by Hunter at 2:00 AM

New Shirt! And it GLOWS!

Have you seen The Watchmen?

If not, why not? It's about as good an adaptation of The Watchmen as you are likely to get in a two hour and forty-five minute movie made by simian descendants.

If you have...then you saw it.

So if your inner child was trampled flat by Dr. Manhattan and his...er...Lower East Side, then I have a shirt for you! 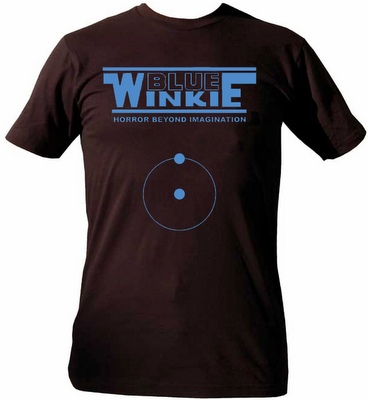 Buy this new, glow-in-the-dark shirt and proudly announce that you've been to see The Watchmen and that yes, it is impressive!

(and the movie is impressive as well)

You know what this means...

Or the comic will be a tad ate today...